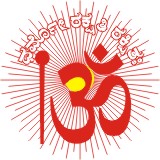 Moral virtues in Indian perspective has religion as its backbone. Vedic religion has been in vogue in our holy land - 'Karmabhoomi' from time immemorial. It has been the unshakable conviction of our people that we are blessed with copious rains, plentiful harvest by pleasing Gods through 'Yajna Yagas'. History registers the profound knowledge of noble sages who all the time performed such Yagas for the welfare of the whole mankind. But in this modern, scientific age there has been a listlessness towards religious duties and preference is given more to show and pomp in performing Pujas and Yagas. Hence the society is deprived of the blessings of the divine effects of the religious rites.


Despites the circumstances a commendable service in promoting 'Satkarma is being rendered by his Holiness Sri Sri Jagdguru Shankaracharya Dakshinamnaya Sringeri Sharada Peethadeeshwara. Jagadguru Sri Sri Bharathitheeeertha Mahasannidhanam. To supplement his great efforts , leading an ascetic life on the model of the ancient 'Rishis' is Vedabrahma Sri K.S Nithyananda, Poorvothara Meemamsaka, Veda Vijnana Mandir, Chikmagalur. He is well versed in the Vedas, Upanishads and Shastra and is spreading ancient wisdom by performing 'Mahayagas'.

With the intention to do something to protect the religion and the culture of this country and for the welfare of the entire mankind Sri Gayathri Yajna Samithi, Haleangady under the Chairmanship of renowned Ayurveda Pandith Haleangady Sri Subraya Bhat ( Hari Bhat) performed Sri Gayathri Yajna in the 'Mesha Masa' i.e from 13.4.2002 to 14.5.2002, with the blessings of Sree Sree Sannidhannam of Sri Sringeri Mutt under the able guidance of Sri K.S. Nithyananda at Sree Jnanahakthi Subramanya Swami Temple premises at Pavanje, Haleangady. On the day of the 'Poornahuthi' of the 'Yaga' addressing the devotees at the religious meet at Pavanje Vedabrahma Nithyananda professed that the place would witness the birth of a reformer who would execute the all round development of the people and advised to conduct 'Sri Pundarika Mahayaga' at Pavanje .

The forthnight - long Sri Pundarika Mahayaga, performed to propitate the Gods, concluded at the Pavanje Sri Janashakthi Subramanya Temple Premises near Mangalore, with the final "poornahuti' held in the presences Yedaneeru Seer.

The Yaga, supposed to be held in Sangli, Maharastra in 1942, is being held for the first time in Dakshina Kannada after the gap of Six decades.
The Pre - Yaga vedic programmes commenced on December 4 and actual yaga started on December 11 under the supervision of Sringeri math seer Bharathi Theeertha and direction of Chikamagalur Vedavijnan mandir Vedabrahma K S Nithayanada

According to learned, this yaga initiates the natural phenomenon of being one with the nature.
Though the nature is 'jada' when it is combined with chaitany the sensation in altogether different.

Nature of the Yaga: Inspiring intensive interaction between an inert 'Prakriti (Nature) and 'Chaitanya ' (vitality) and galvanising the blend of the two faculties is the aim of 'Mahayaga'. The process to cause this effect is to proffer the waves of incantation (Mantra Taranga) through 'Agni and thereby to provoke 'Vedic Tatwas' (concepts) like Indra and Agni to act benevolently. This process comprises of the four rites - Deeksha, Japa, Parayana and Tyaga.

Deeksha: It yields fruits for our 'Sadhana' (efforts). Deeksha means putting concentrated efforts on a goal till we accomplish it. Performing all the rites related to it in accordance with 'Shastras'.

Japa: Mere incantation of a 'Mantra' or 'Akshara' is not the 'Japa'. It is the comprehensive effect of constant pursuit of our goal, our commitment to it, our awareness to it and our frankness, devotion and attitude to perform without the desire of the returns.

Parayana : In 'Yagas' God is perceived in varying forms, Tatwas (concepts), through varying rites, yielding equally varying results. The knowledge to deal with such varients with proper approach is 'Parayana'. This itself becomes 'Tyaga' (denouncement). Those devotees are called 'parayanas' who perform rites with an attitude of 'Tyaga', with a purpose to achieve welfare of the society, by performing 'Japa' being bound by 'Deeksha'. Thus the complex process of dealing in these four stages envigorating 'Chaitanya' among those bound by 'Deeksha' is the 'Pundarika Mahayaga'.

The term 'Pundarika' also reminds the supporting principle of 'Vishnu'. Mythology describes Lord Vishnu as reclining on 'Adishesha' amid the 'Ksheerasagara', attended to by Goddess Laxmi and praised in melody by the sage Narada and others. The 'Ksheerasagara' is the nourishing force of life. 'Adishesha' in the middle of 'Ksheerasagara' represents instincts which are under Lord Vishnu's control. Goddess Laxmi symbolizes the poise of mind. Getting the blessings of Laxmi leads to 'Nadananda' (bliss of music). This together with the 'Astha Aiswarya' can be accomplished if one succeeds in controlling mind which grows on food. This means ' Vishnu is 'Prakriti and 'Palanakartha'. The Ayana or the search for this Nadabindu' i.e Nara becomes 'Narayana' - search for the eternal bliss. Hence the Pundarika Yaga becomes a religious process of blending 'Prakriti and 'Chaitanya' and by there ensuring finer, capable and efficient society.

The final days ceremonies were witnessed by Dr. Veerendra Heggade, Dharmadhikari of Sri Kshetra Dharmastala. He was accompanied by Vinay Kumar Sorake, Udupi MP, Abhayachandra Jain, Moodabdri MLA and others.

On all days of the yaga from December 11, there were religious discourses.
By Knowledge Seeker at February 19, 2012