1.     One of the meanings of #Kulapati is the supremo of #kula (family or lineage), i.e. whose greatness in comparison to that of others has been recognized.

2. Another  meaning of #Kulapati is the headman of the family. Suppose there is a family having 105 members. The person whom the remaining 104 persons obey unhesitatingly and accept his undisputed authority is called #kulapati.
In ancient days, the students during the period of their study used to reside in the house of the preceptors. The children who had developed some signs of intelligence used to be left by their guardians in the care of preceptors. At the age of 8 years, after #Upanayana Samskaara , the children would study in the #catuspáthii attached to their preceptor's residence till they were 24 years of age. A span of 12 years was dedicated for the study of Vedas according to the Vidhyaa Varna they choose from Jnana, Bala, Sampat, Bhakti. So till 20 years, they gain mastery over Veda & its branches. They were provided with food, accommodation and clothes free of charge. On or after 24 years of age, they used to return home with #Abhijinánapatram (Certificate of Merit) given by the preceptors after the #Samávartana Samskára. Sometimes, some meritorious students would return to their own countries and home with certificate of merit after completing their studies even before completing 24 years of age.

Naturally, a student, who had completed his course of studies, was regarded as a person who had crossed the ocean of learning. He was called a #Vidhyásnátaka (one who has bathed in learning) and a #Vratasnátaka (one who has bathed in vows). In the opinion of a large number of the #Gruhyasutras there were three types of Snátakas -
Some Snatakaas would continue their mastery over more than one Vidhyaa Varna and a few were mastering all the Varnas. Then go for Snaatakoottara studies. Here the Kulapati extends his/her help by providing necessary guidelines for them. They may be appointed as teachers or go for Desha-Paryatana  in gaining knowledge from the nature & many other great Rushi-Muni's. In those days there were a large number of important seats of learning such as:
The guardians used to consider themselves fortunate in sending their children to these seats of learning. Usually, the #Upádhyáyas (lecturers or assistant lecturers) used to give classes to the students. The academic side was controlled by #Adhyápakas, the adhyápakas activities were supervised by the #Acáryas who in turn were assisted by #upa-acáryas. The meaning of the word acárya is: one who imparts lessons to others by their exemplary conduct.- Acaran'át páthayati yah sah ácaryah. That means, the Acáryas will have to teach others by their exemplary conduct. Only then the education imparted by them will be firmly established and properly assimilated by the pupils.

Those who used to run the #Catuspáthiis, whether big or small, didn't have enough resources of their own. Their only wealth or capital was sufficient academic knowledge earned through untiring zeal and efforts. The local kings, rich persons and the public used to provide them with money and other resources and they would give it unconditionally. That is to say, no strings were attached to praise the donors in exchange for their monetary help. These #Catuspáthiis were not the flag bearers or proponents of any set dogma or ism. Their only task was to disseminate the flow of knowledge and wisdom through out the length or breadth of the country without partiality. People would give respect to the head of the #Catuspáthii or #Mahavidyálaya* whose erudition had brought universal recognition, even more than they would honor the king of the land. Even the king used to rise up from the throne in honor of such scholarly heads of #Catuspáthiis. Of those great scholars or Mahamahoupadhyás, those who would provide "ten thousand students" of his institution with free food, clothes, education and accommodation were called #Kulapati.

These days, we notice that in some places in India, the chancellors of universities are called #Kulapatiis or vice-chancellors (#upakulapati). (In those days, the universities were called #Gurukulas or #Ashramas named by a Rushi or Devataa). It seems that the word #vishwavidyálaya is of recent origin. It is just the literal translation of the English word university. Indiscriminate use of these terms creates confusion in grasping the meaning because present chancellors do not provide 10,000 students with free food, accommodation, clothes or education, but if anyone does something like that or will do like that in future, will certainly be qualified to be considered as Kulapati. In some regions, people mistakenly call chancellors as Acáryas or vice chancellors as upacáryas. It is also a case of defective use of terminology because the acáryas or upacáryas do not teach or do not set an example of ideal conduct. For this the proper term should be Prajina-dhiipaka (Prajina +adhiipaka) or Vidyádhiipaka (vidya + adhiipaka). I suppose you have properly understood the meaning of the word "kulapati".

[* College or residential university, i.e. a large Catuspáthii where there was provision for teaching every branch of knowledge.]
By Knowledge Seeker at September 05, 2012 3 comments:

While going through manuscript by Sharnghyadhara, there was a shloka to demonstrate that one doesn't have to go near to an object for its measurement. By its gOchaara lakshana itself, whole knowledge can be attained. Based on these mathematical arguments he proves that its not required to go to a planet to know its Kirana, GOchaara, ShaaKha, Chalanaa rules. The mathematical formulas which calculate these kinds of parameters accurately are grouped under KhagOLa-Ganita. So the query is as follows:
There was a pond, it had blossomed a Lotus which stood by its stalk, bit high on top of water. This was the picture got when a person stands in the banks of pond. A mathematician if wishes can calculate the total length of Lotus-Stalk, depth of water from tip of stalk floating up, and other detail can be calculated as he wishes. It is the power of Beejaganita & Rekhaganita.

We know that Trigonometry can be utilized. But this is bit higher than basic ones. So, how to interpret this?

This problem from Lilavati can be solved without going into trigonometry or other higher concepts. All you need is the concepts of Pythagoras Theorem, Binomial Expansion and Linear Equation in One Variable. All three concepts were known at the time of Bhaskara I|. The Pythagoras Theorem is known from शुल्बसूत्र and Binomial Expansion coefficients can be known from what हलायुध refers as मेरुप्रस्तार, an old concept attributed to पिङ्गल.
वितस्तिप्रमाणम् = One hand-span
हस्तयुग्मे = lotus submerges in the pond at a distance of 2 hand-spans from its original location. 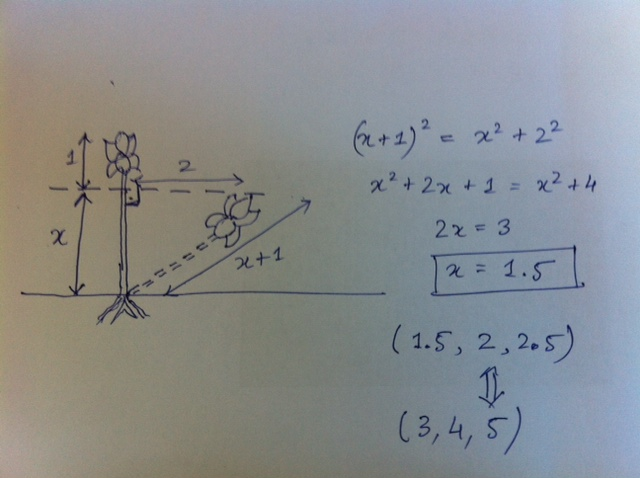