Let us start our discussion from one of the shlokas of the Giita':

["O Sanjaya, now that my children and the children of Pandu have gathered on the battlefield of Dharmaks'etra, of Kuruks'etra, eager to fight, what is taking place?"]

This is the first shloka of the Giita', about which I have spoken to you before. Today I will give you only an introduction.

There are several explanations of the word "Krs'n'a" -- etymological,   philosophical, biological, historical, etc.

The philosophical explanation is that “Karshayateti Krs’n’ah” - Krs'n'a attracts every being: knowingly or unknowingly, each and every particle of this universe is being attracted towards the Nucleus of this entire Cosmological order. But it is the duty of beings to move towards Him. He attracts everyone. The second philosophical explanation is the feeling in the jiiva (unit being) of its "I"-ness -- "I exist," "I am." Since He is there, this feeling of "I"-ness is there. Had Krs'n'a not been there, would I have remained?

A Vaishnavite poet had this to say:

[The restless mind defies restrictions, and runs only after Him.]

I do not have a mind to go to or to look at Krs'n'a, but even then, it is as if something keeps pulling me. Thus the word "Krs'n'a" means "the supreme attractive faculty". 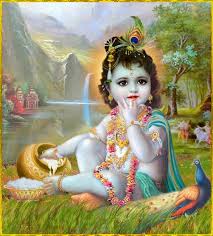 Again, krs'n'a has the meaning "black". The colour black has the greatest attraction for human mind. Among all colours, our attention is drawn first by black. This is the reason why the colour black is called krs'n'a. It should be remembered, however, that the complexion of the historical Krs'n'a who lived in Dva'para Yuga* was not black.

There is also another meaning of "Krs'n'a" -- krs'i bhu'h or krs'ibhu'h. The root verb krs' means the feeling "I am". Don't you all have a feeling such as this, "I exist"? In fact every individual has the feeling "'I am", mya'y hun [Hindi], aham' asmi [Sanskrit]. Whenever that "I" feeling is struck a blow, people get irritated, worried, angry or frightened. Now this feeling "I am" [is represented by] the root verb krs', and the meaning of the root verb bhu' is "to be". Hence the meaning of the word "Krs'n'a" is "I am because He is." In other words, it is only because of Krs'n'a that the world exists and living beings exist. If Krs'n'a had not been there, living beings and the world would not have been there either.

The historical Krs'n'a, as everybody knows, was a special personality who fought and made others fight for the establishment of dharma and morality. The worldly father of Lord Krsna was Vasudeva, a popular ksatriya leader, being an army commander. But Lord Krsna's guardians, Nanda and Upananda, the cousins of Vasudeva, were known as gopa yadava (milkmen). His worldly father, Vasudeva, was a ksatriya by profession. His guardian, Nanda, was a gopa (vaeshya); and his uncle, Maharsi Garga, was a vipra, because he adopted a life of scriptural study, contemplation and meditation. There was no rigidity in the caste system. Sometime later the rigidity came into being.

The leader of the Mahabharata was neither the Pandavas nor the Kaoravas, but Lord Krsna Himself, both directly and indirectly. It was all foreseen by Maharsi Garga. I will say something more about Maharsi Garga sometime later. It was Maharsi Garga himself who named the child Krsna: "Krsna nama rakhen Garga dhyanete janiya" -- in dhyana he realized that Purusottama was to take birth, and he thought it proper to name the child Krsna.

As you know, Narottama Das Thakur composed As't'ottar Shatana'm ["The One Hundred Eight Names"] of Krs'n'a. In one place he says:

[Failing to find any limit, Garga named the baby "Ananta" ("Limitless"); and, enlightened by his meditation, gave Him the name "Krs'n'a".]

Ra'dha'* attained Krs'n'a through madhura bha'va [sweet devotion]. In Krs'n'a she found everything that was charming and sweet in life. The spirit of madhura bha'va is this: "I will focus my entire existence, whether physical, mental, social, or spiritual, one-pointed to derive sweet bliss from my dear Krs'n'a". Usually, ninety-nine percent of all devotees maintain this Ra'dha' bha'va due to its intense sweetness. Krs'n'a of Vraja increased the degree of sweetness by playing on His flute.

What is Krs'n'a like? He is like the dark patches of clouds which appear as harbingers of hope in the northeastern sky after the scorching, simmering heat. Krs'n'a brings hope, Krs'n'a means hope -- hope of protection, hope of deliverance. The very sight of Him brings peace to the mind, delight to the eyes, and joy to the heart. Some chew betel to colour the lips and mouth; others use cosmetics, but my Krs'n'a needs nothing to redden His lips except His sweetly enchanting smile.

When human beings become restless for the attainment of Parama Purus'a, when they strive hard to realize Him in all their actions (and ultimately succeed) do so, their zeal, their irresistible urge for God is called a'ra'dhana' in Sanskrit. The prefix a - ra'dh (the root verb) + anat' + t'a' in feminine gender = a'ra'dhana'. The entity who does this a'ra'dhana' is known as Ra'dha'. Here Ra'dha' represents the mind of a devotee. The people of Vraja felt and realized Krs'n'a in all their thoughts and actions.

It will be better if I say something more about Krs'n'atattva [the inner meaning of Krs'n'a]. In Vaes'n'ava Tantra the last bone of the vertebral column is called kula. [Here resides the serpentine coil.] In Tantra it is called kulakun'd'alinii, while in Vaes'n'ava Tantra it is called "Ra'dha'", and Paramashiva [Purus'ottama] is called "Krs'n'a". Through sa'dhana' we raise the kulakun'd'alinii upwards, and in the end the union of Ra'dha and Krs'n'a takes place.

Each and every word is meaningful.