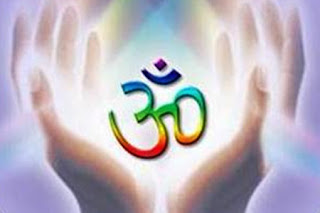 The above mantra from Atharva Veda aptly describes the terms Vilambi and Hevilambi with reference to Vedic Nyáya shástra or Science of jurisprudence. Nature gives food to all. This is called 'Ambi' from nature. Whichever is bestowed by 'Ambe'is called 'Ambi'. Ambe means mother or nature. This is a root word from Brahmi language, which is the mother of all the languages. The oldest dialect of Kannada or Prakrit Kannada was also derived from  Brahmi. The word was further added to Sanskrit, the language which was scientifically formed combining  the thousands of languages. But in the modern Sanskrit it is called Ambi means food which is quite different term. 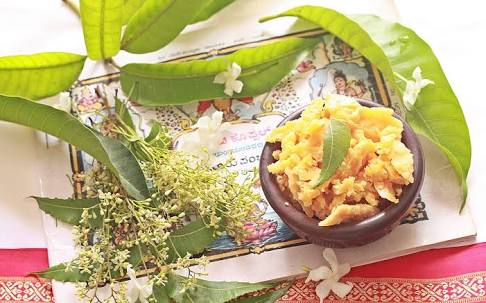 Which is the right food for you? A particular food is prescribed for each being. We are not supposed to consume  the food which is not meant for us. For instance, we can eat rice but as it is right food for us. The phrase Annam Chathurvidam emphasises the importance of Anna or Rice which serves our four organs: eyes, ears nose and mouth respectively. Therefore eating  grass  instead of rice is a worthless deed or 'Hevilambi'.

Cow, deer, chicken, sheep, dog , pig, cat , mouse etc are called Hevilambi as they are not considered to be human food. They are Vilambi if they are used so.

If you eat the food from nature, you need not seek the knowledge elsewhere. 'Annaat jaayate buddhi'. Whoever eats the Anna(food) they are bestowed by Buddhi or supreme intellect and it enhances our knowledge. Seeker needn't seek the knowledge as it comes to him naturally. Even such quest or search for knowledge would not be successful.

Applied this in Vedic Nyaya shàstra or Jurisprudence, Each 'Samvatsara' or a Vedic year is described with a suthra or aphorism of its own. Each part of the 'Nyaaya Shasthra' is exemplified by 6 stories each which focuses on the reasons of mistakes and crimes. Pavamana also provided Prayashchitha or redemptive acts in the form of 610 manthras which has to be practised by the sinner. Originally there were 720 manthras, now only 610 manthras are remaining. In order to overcome that shortage Asya Vamiya Suktha prescribes 53 manthras, Rigveda 10-119 :13 mantras, Rigveda 10-120 :8 mantras, 16 manthras from Purusha Suktha, 24 kila manthras. It had been endeavoured to make a collection of 724 mantras in total.

6×6=36 x 2 (this or that) = 72 x hundredfold = 720 mantras were there. Same count was retained in 'Devi Purana' to symbolise the Raksasas or Demons or sins in us. Destruction of such demons or vices in us was also exemplified in the form of a stories in Puraaña.

Reality is different from self applied meanings. Hema has the meaning that horse of a dark or brownish color. Lambi has the meaning that is a kind of food prepared from grain. Even if Hema is considered as gold and Lamba as downfall as somebody did what is the use of gold value falling down for immortal like sage Naarada? Just to say this kind of silly matter, Samvatsara naama wasn't required. Even Lamba can be interpreted as height or Vruddhi. So Hema Lamba can be increase in gold. This is the evidence hat how a single word hemalamba can be interpreted as increase and decrease of gold rates by using mere dictionary based translation. Combination of Hema+Lamba(i) is meaningless. For our comfort and happiness, changing even original names of Samvatsara is totally useless notion. No problem because sage Naarada won't be sad for that. We mortals only be the losers of high stream of knowledge provided by them. Every word in Samvatsara naama is very high level Kaala Niyaamaka Sutra based on Saankhya. In that sense Jyotisha sutras are hidden in the names of Samvatsaras. A little modification due to any reasons is nothing but deviating towards ignorance.

Ignorance of patters hidden in Hevilambi - Vilambi inclined one towards wrong words like hemalamba or hemalambi. Ignorance of letters and pronunciations due to some regional local language based Vaikhari is the reason for change. Several published invitations, panchangas, mainly different inscriptions have hevilambi. Some panchangas changed it to hemalamba in recent 60 year cycles. But 1000's of years before hevilambi was there. Samvatsara naama adhyayana itself was a vast subject of study. Due to various reasons society left that Kaala Niyaamaka Sutra study and started living just simple mortal life.

Hema Lamba meaning bestowing long drawn happiness is against tradition because we don't wan't only happiness. Sadness is also required. That's why mixture of Neem leaf + Jaggery is consumed as prasaada on Yugaadi day. Again every thing has a return back. If this whole year is for happiness, then whole of next year should be sadness as these two are coupled concepts. If hemalambi is there how vilambi becomes valid? So Hevilambi Vilambhischa is the proper shloka.
Sage Naarada had given sutra in Nyaaya Shaastra using Atharva Veda as 'ábhūtir upahriyámāṇā' Vilambi and 'párābhūtir úpahr̥tā' Hevilambi. Nobody can help if dictionary or self proclaimed mortal interpretation is done without  adhering to Vedas. Real path towards study of ancient knowledge system is demonstrated in the article. Acceptance or rejection is purely personal. Sages sy that real knowledge is not easy in purely physical domain.